we will not builD and test
64 isos
every month

arcolinuxb project means
YOU should build it

more isos is always more complexity
This will help you

Some of our computers will never work on the latest linux kernel.
They require the linux-lts kernel.

That is now possible. After the installation and a reboot you will be working with the linux LTS kernel.

Our isos are always built with the latest Linux kernel released by Arch Linux.

The bulk of our users have no issues whatsoever with this kernel BUT we got reports back that some of the users booted into a black screen.

Often they mentioned the presence of an nvidia card along with an intel card.

In order to help users with a specific kind of hardware, we have now launched the LTS project.

This particular kernel can be installed with

ArcoLinux has provided in the past a script in the ~/.bin to easily migrate to the linux-lts kernel.

HOWEVER there were instances reported that some of our users were getting this black screen and they were not possible to go to a TTY screen and run the script.

There is no need for that anymore.
The solution is …

Choose the correct iso to start with.

a whole chapter on
calamares

Calamares has a new update.

Calamares is our installer and it is a super tool to install any linux distributions with a graphical interface.

We are at 28 videos already just about calamares

Via pkexec calamares -d you can always launch calamares via the terminal. We analyzed the messages and improved the calamares config.
Then after a comparative test we decided on the setttings.

The goal is a fast booting system with no need for internet.

Calamares – set all cores to be used automatically

We have a script in ~/.bin to make sure you use all the cores of your hardware.
We tend to forget it and not run it.
Now Calamares will run it automatically for us.

calamares can be started in debugging mode

It was always possible to start calamares in debugging mode with

but now we have actually added a menu to your system so you can just click.

The debugging link is in the bottom left corner. 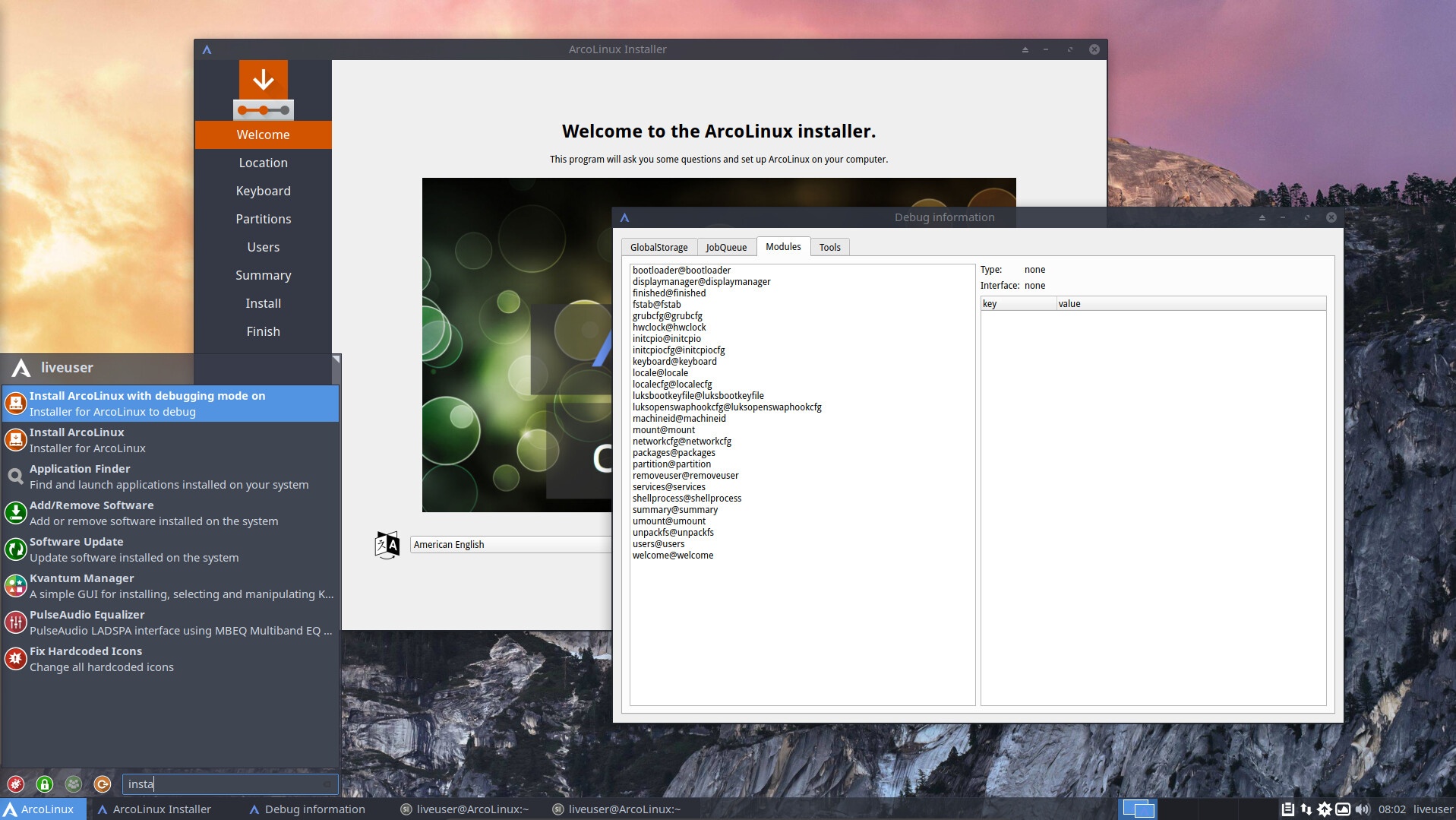 More info on the beta page of ArcoLinuxB.

ArcoLinuxB lXQt has been created

We have themed and tweaked LXQt to our liking with a backend of openbox.

Notification daemon is on boot off. You can reactivate it if you want.

Xscreensaver is installed as lock mechanism. You can set it off if you get tired of it.

LXQt does not support setting a wallpaper on 1 screen if you have a dual screen.

Your wallpaper will be stretched out on 2 screens with strange results.

ArcoLinux created a special dual-screen wallpaper package for people with dual screens and single screen users will get these amazing wallpapers as well when we boot up.

We themed ArcoLinuxB Gnome so it is in line with the other desktops and more importantly all the usual keyboard shortcuts are now also available in this desktop.

If there was already a keyboard shortcut available the general rule was to keep it.

We just overwrote one keyboard shortcut.

We also gave gnome/budgie more keyboard layouts so that if you do a skel and the new dconf sets your computer back to BELGIAN keyboard you can easily switch back to yours. 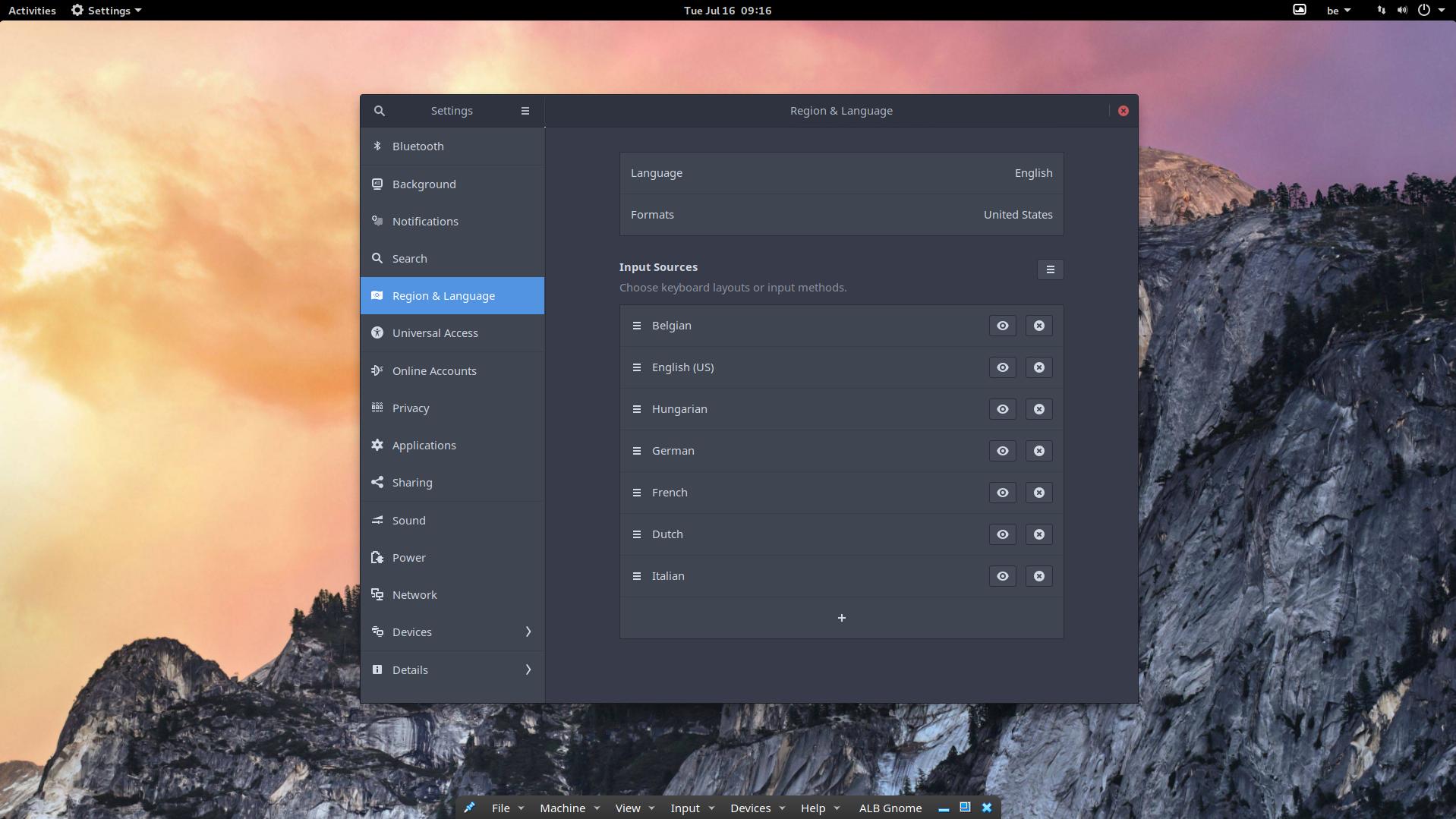 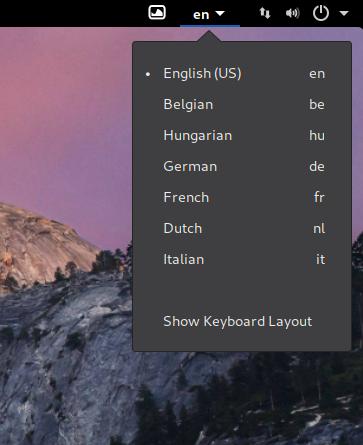 new grub lines to boot from

On the forum we have supplied many solutions for booting up and changing the grub line. Those solutions are now in the standard startup.
If one line does not work, try another till it works on your hardware.

Also use keys like e and tab to manually change the boot line. 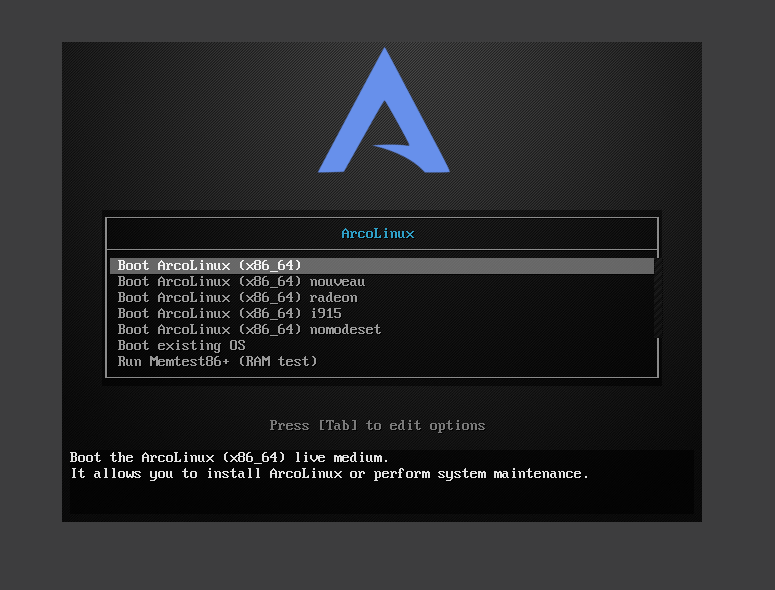 The blue line that went across the screen was obtrusive IF you had 4 Operating Systems on your computer.
That is why we changed the standard boot wallpaper and created a few extra just for fun. 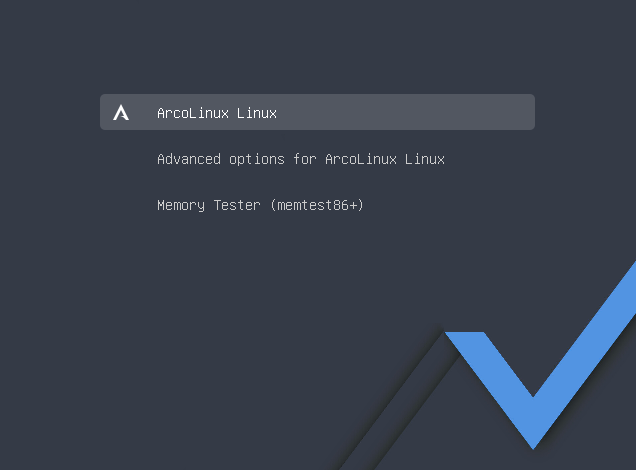 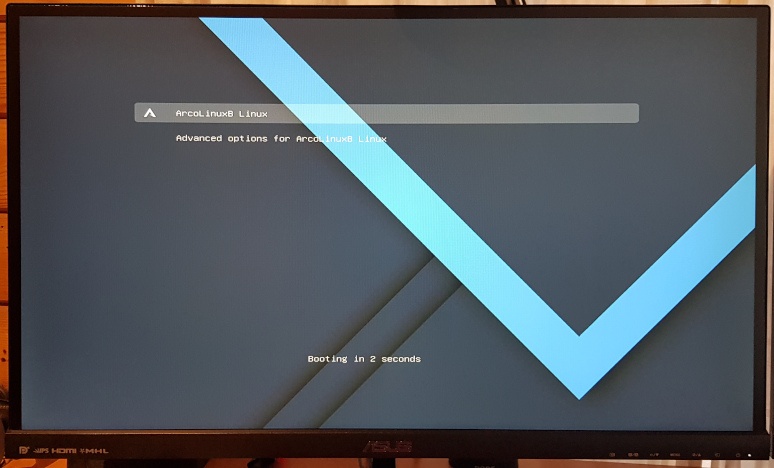 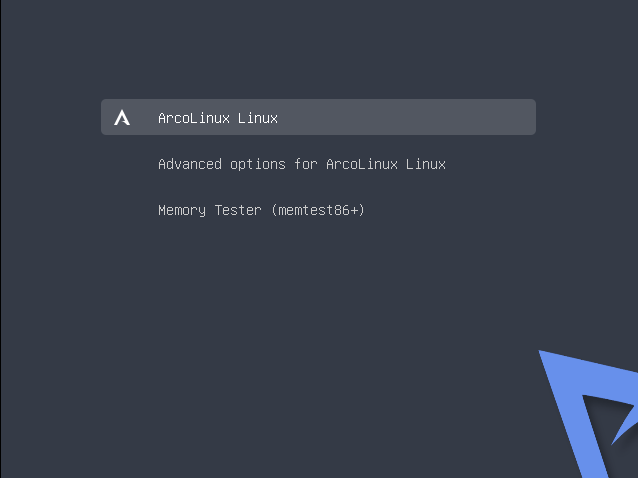 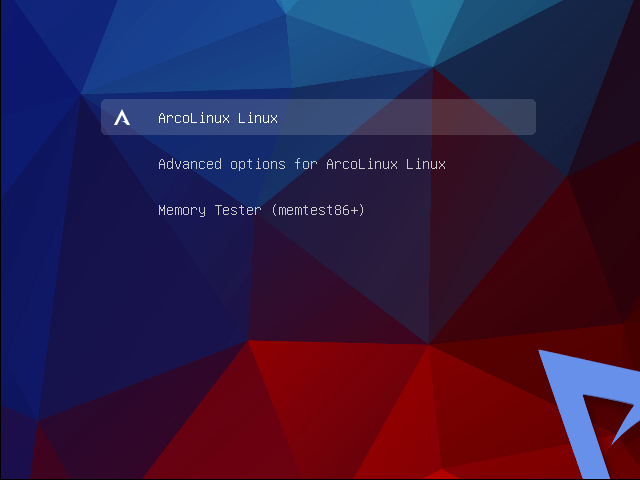 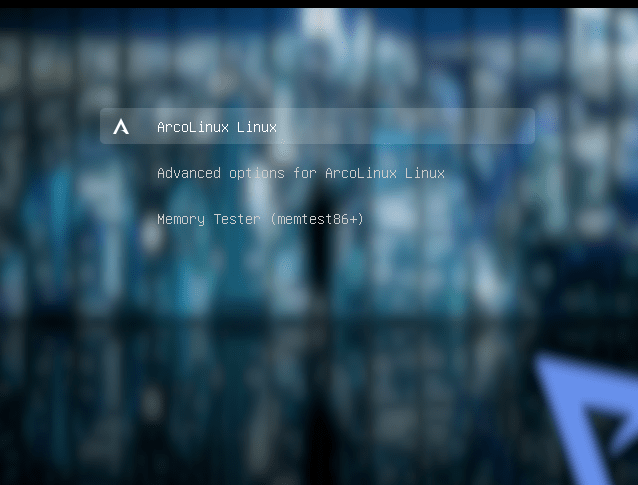 Calamares is our installer and it is a super tool to install any linux distributions with a graphical interface.

During tests we created 4 partitions on one SSD or HDD. We noticed not all the icons were looking the way we expected them to look.
We were missing an ArcoLinux icon.

We have adapted the official theme from vinceliuice to what we need. 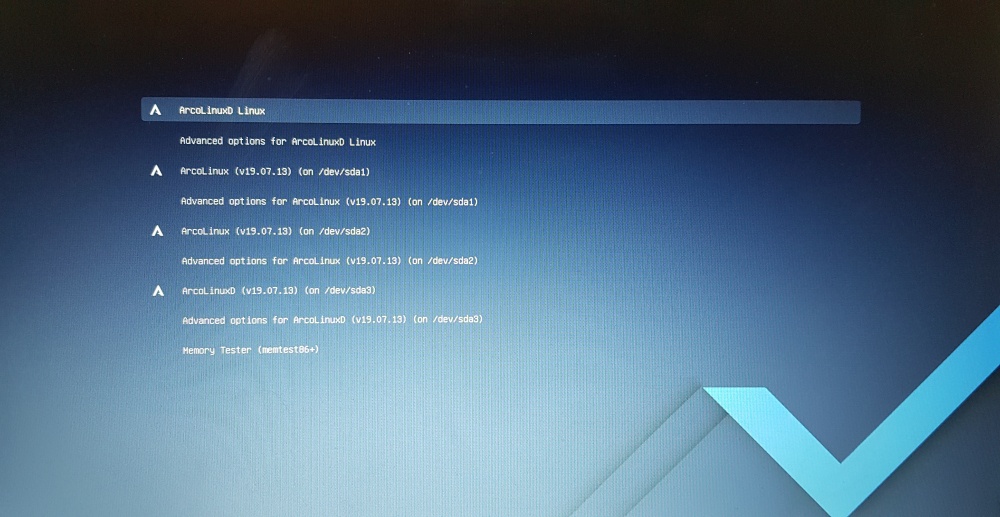 Change to any wallpaper 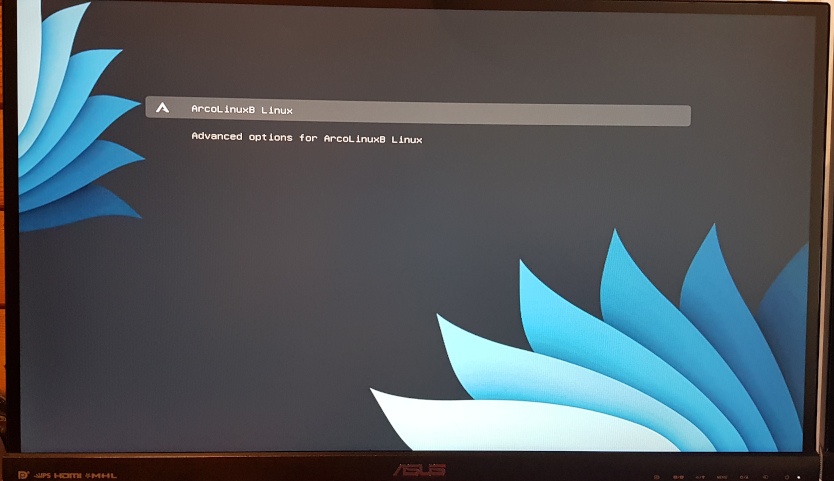 In the meantime there is a package on AUR called hblock. To avoid confusion we renamed our package.

Our package contains much more settings and will be always up-to-date. 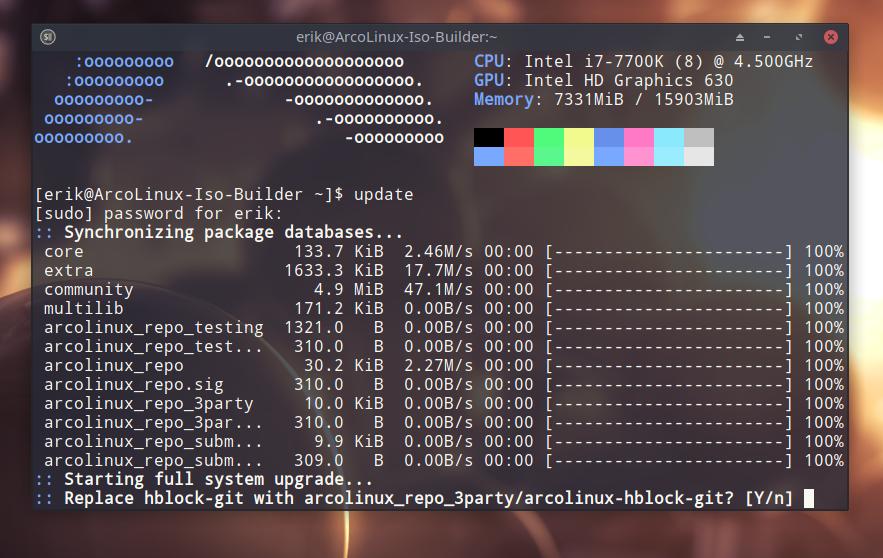 neofetch can use the medallions

You can now also add the medallion logos to your terminal with neofetch.

We have a keyboard shortcut on Xfce and Openbox that activates or deactivates a conky.

We will gradually move through the desktops and add the keyboard shortcut. 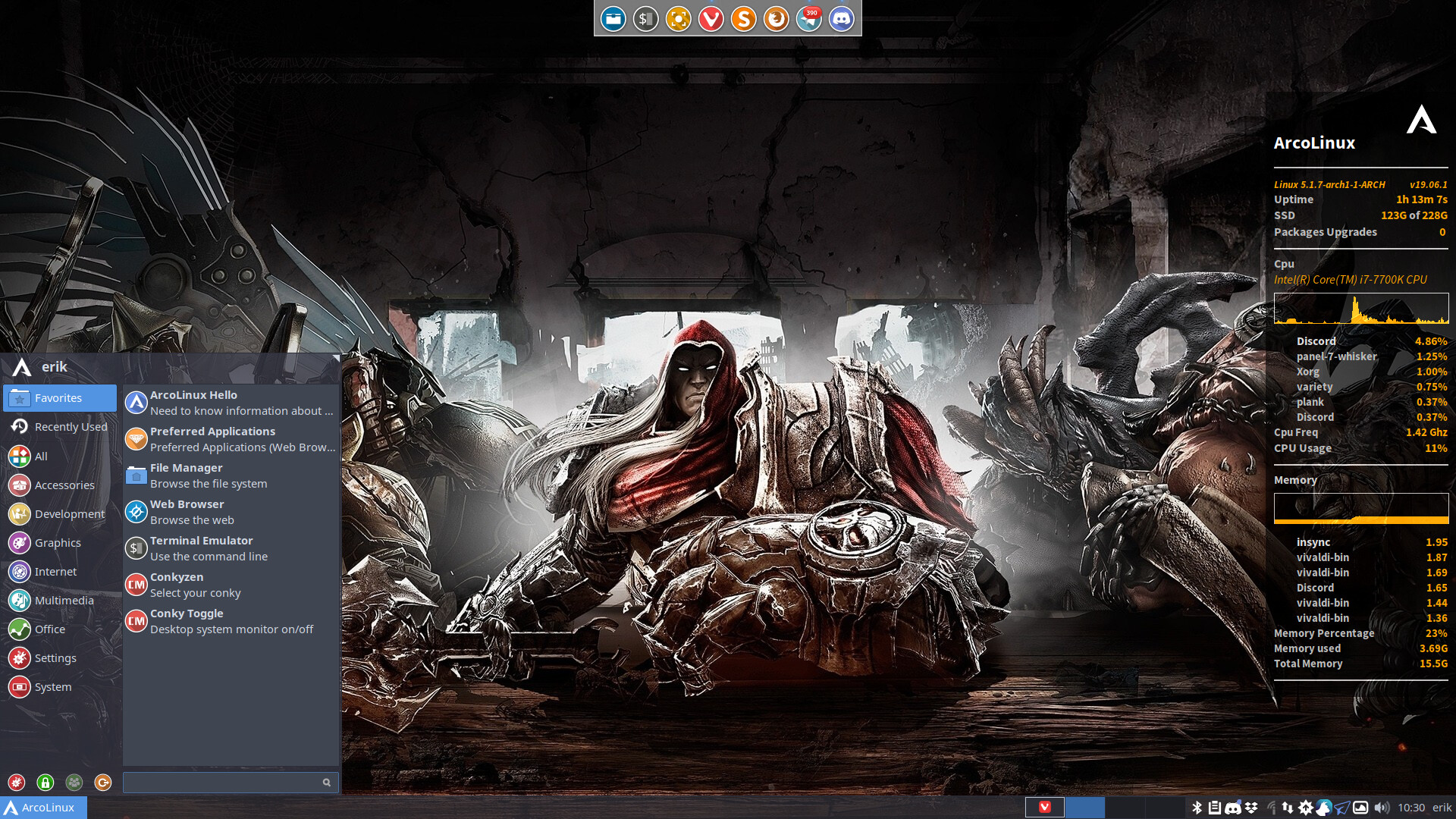 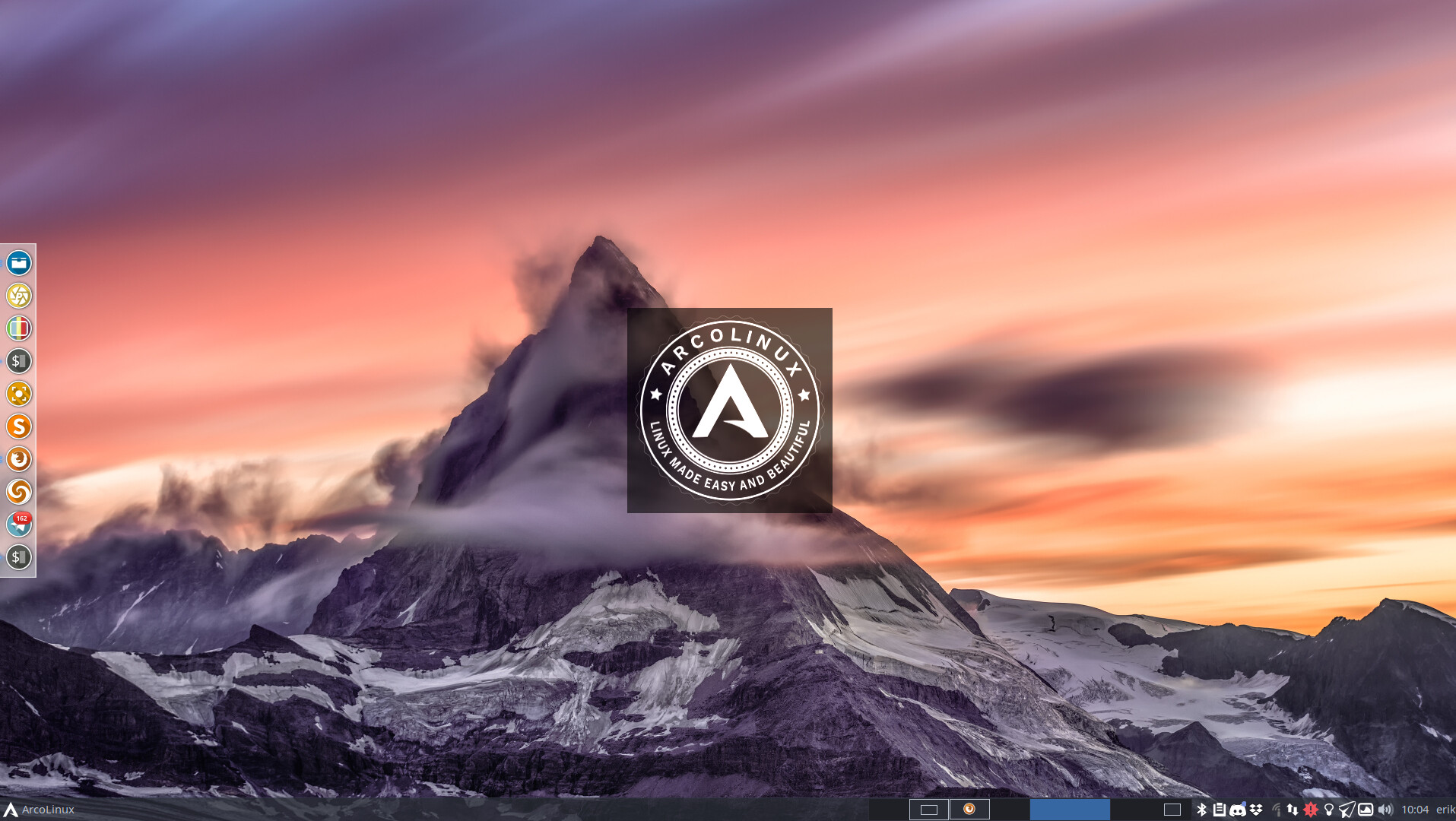 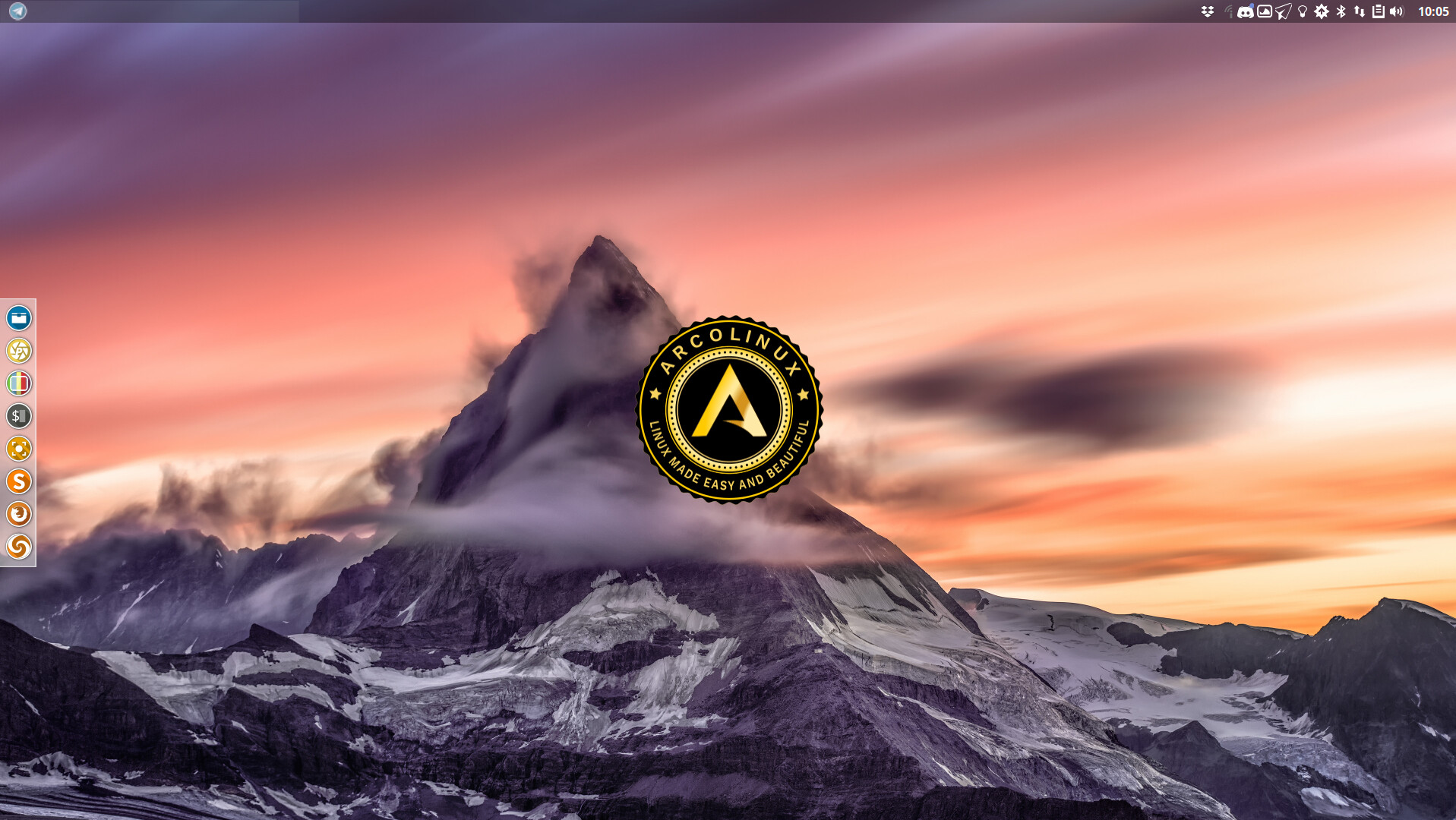 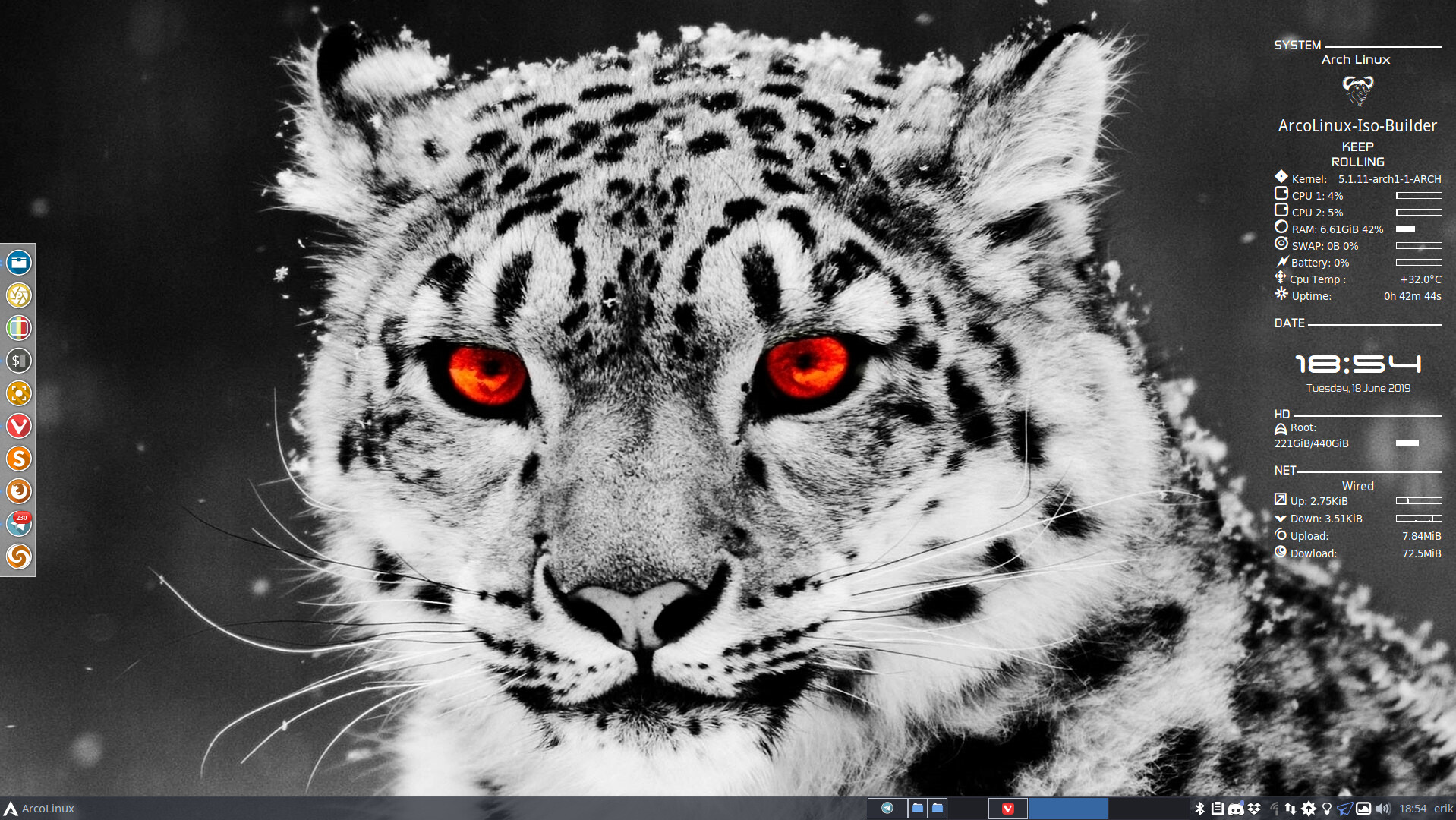 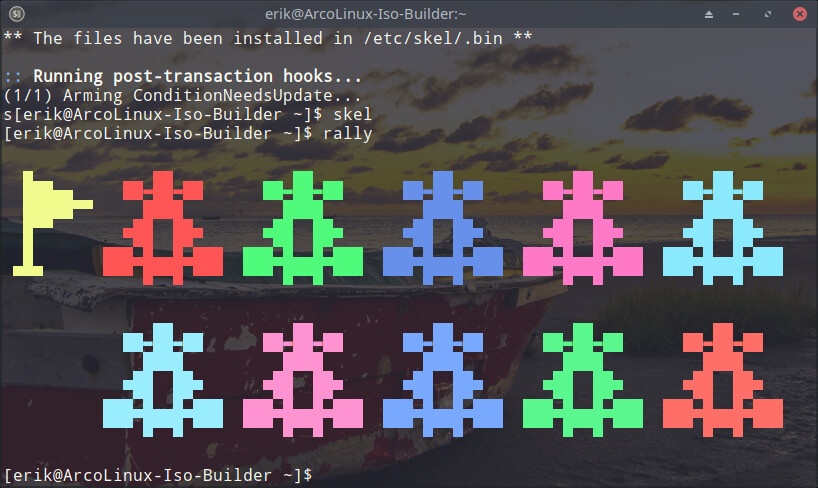 If your intention is to keep rolling and not do a clean install, you can follow the changes via scripts in

The developers of grub are using a slightly different syntax in their grub file. We followed their lead.

Nothing changes for the end-user.

The alias is there to launch a script to Use All Cores that can be found in ~/.bin/main.

It will ensure that your computer uses all its cores when installing packages from AUR.

oh-my-zsh was removed as a package since it is far easier to install and maintain via the script on their website. More info about zsh and oh-my-zsh.

Zsh stays on the iso. Just not the oh-my-zsh package.

We added the package xf86-video-nouveau back to the list of graphical drivers. It was out because of conflicts with the kernel in the past. No issue today.

The tweaks, we applied to the previous kernels, no longer apply. So we had to delete the file.
Updating your system with the alias update, fixes the issue.

We took a look at the conkies and check to see if we can improve them somehow.

You know that every window manager will treat a conky differently and you need to dive in the code to fix that.

In between updates something has changed in this package. A few days back we were no longer able to switch bluetooth on and off.
Solution is on the ArcoLinuxD githubs, in the .bin/stayrolling folder and the change is in the isos.
The user needs to be part of the group rfkill.

Inside geany you can use a terminal and you can set geany to follow the directory path. If you have different files open from different directories, your terminal will change directory immediately to the same directory.
See image. Tip from userx-bw on the forum. 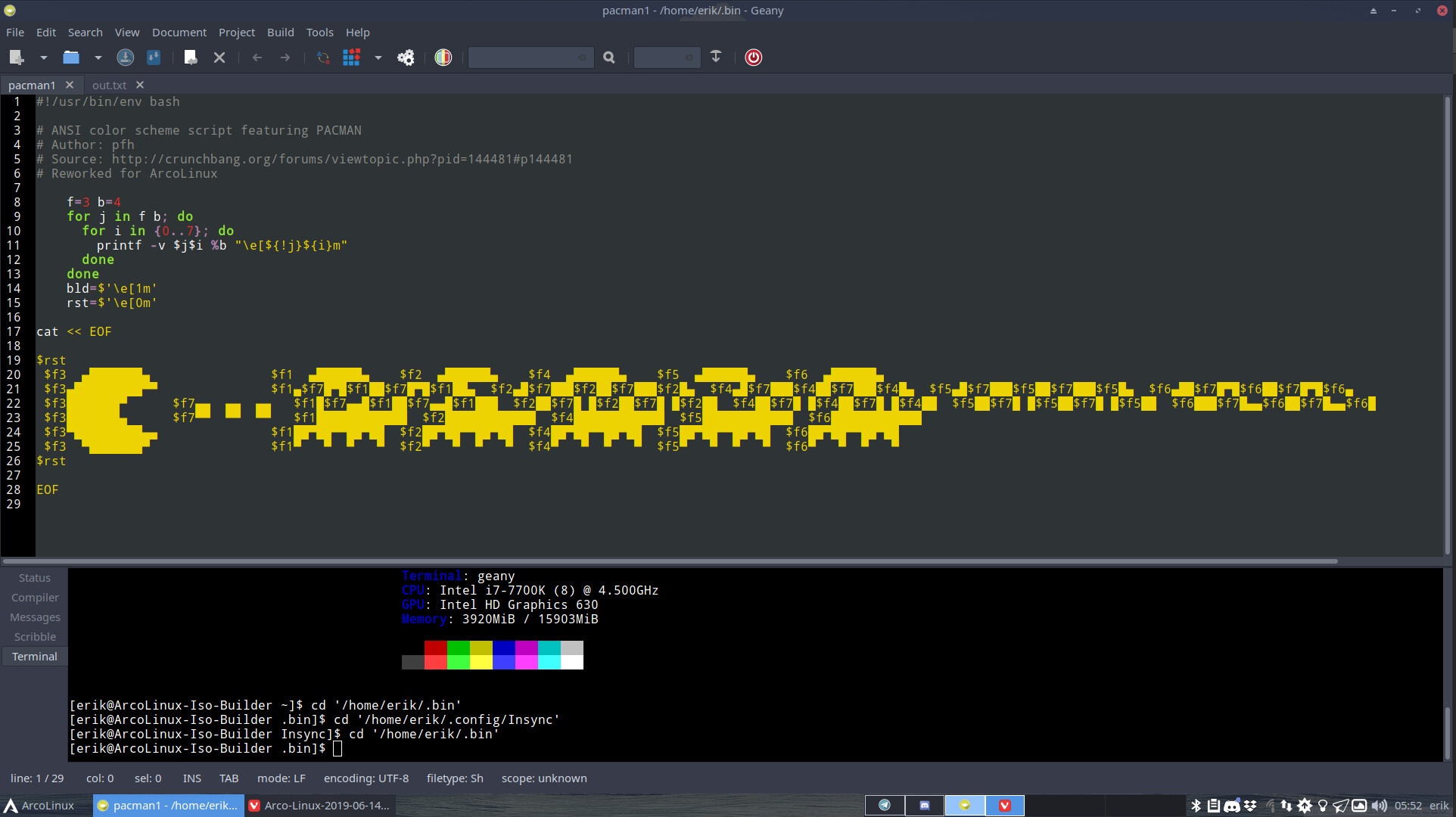 xfce no border in notifications

Thanks to the sharp eyes of m3lst4d we have omitted the border around the notification area in our system panel in xfce.
You can suggest improvements on Discord.
There is special channel for it. 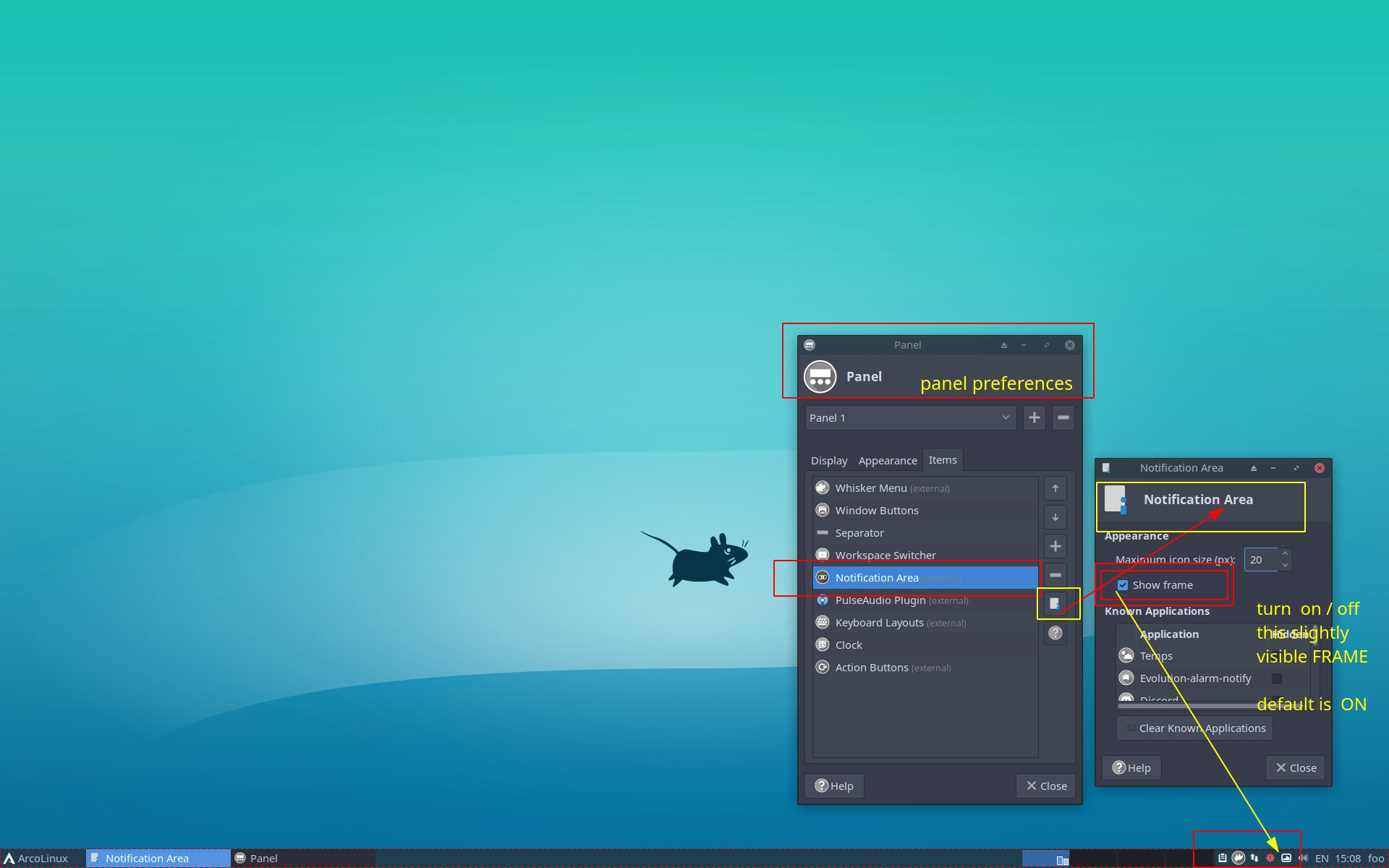 This file in ~/.config folder keeps track of what the default application is for an extension or a particular file.

We made sublime-text more predominant than geany.

Just for fun and to distinguish visually that you are booting from the ArcoLinuxD usb.

if you shop you donate to arcolinux

Now you can purchase gadgets like stickers, t-shirts, hoodies, phone cases, caps,… etc at the store and part of the money will go to the ArcoLinux project.

let’s shop and support arcolinux
in the same time

to do next month(s)

We will create more LXQt tutorials. 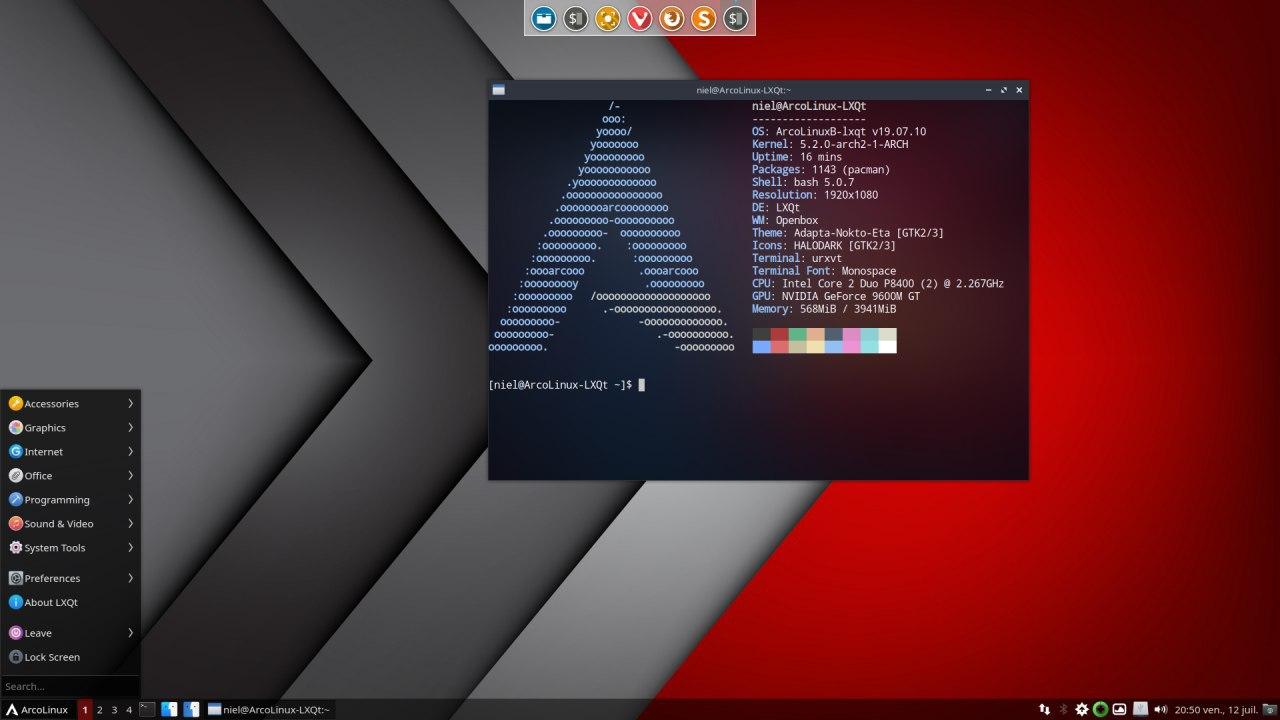 how to stay rolling

We have dedicated an article to this particular topic since it is probably FAQ number 1.

How to update any ArcoLinux or how to stay rolling 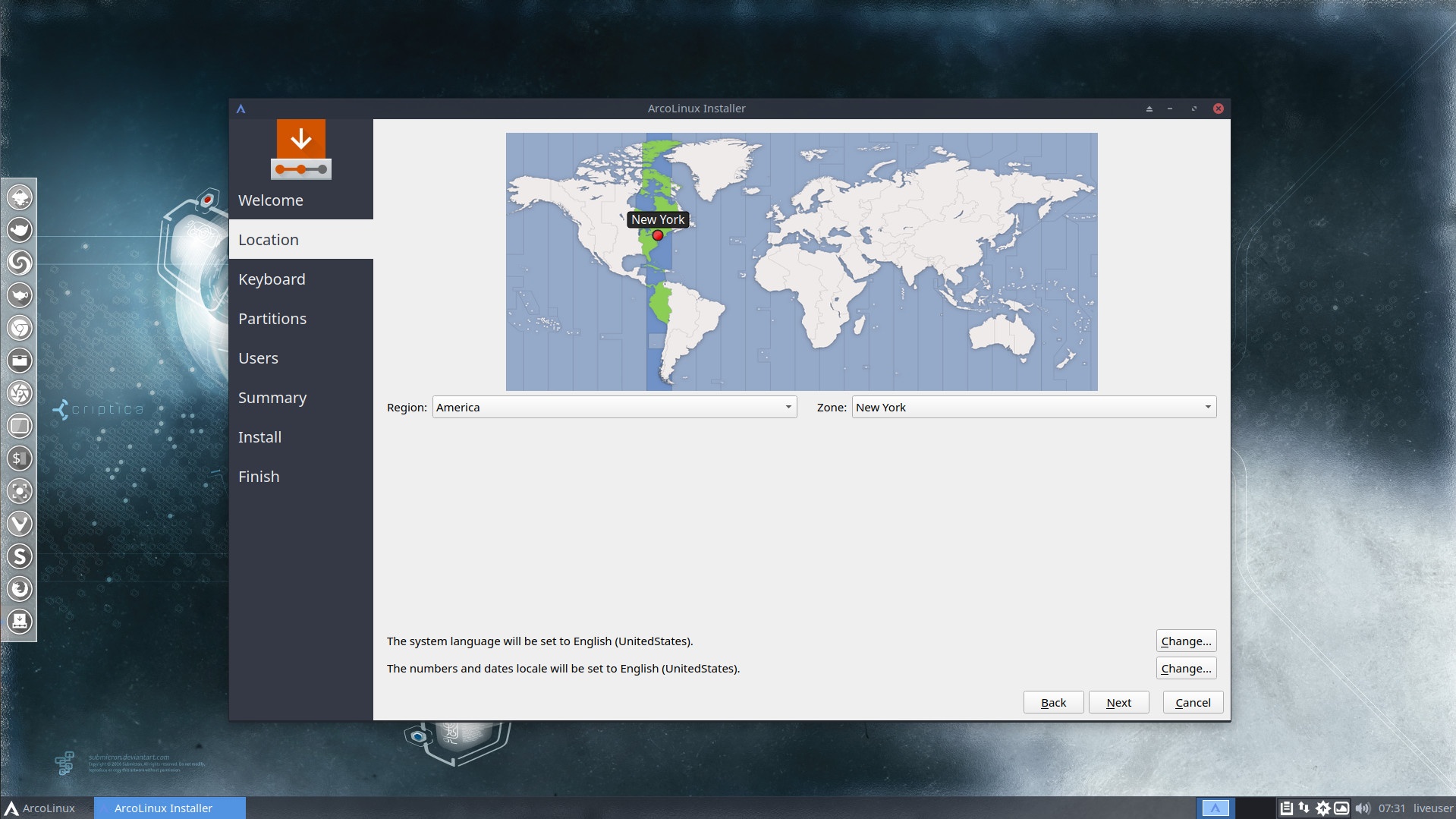 The full package list of the latest isos can always be found on github at this address :

More detailed information can be found in the
beta links in the arcolinux.info menu
and of course in the commits
On github.

We aim for Saturday, 18 April